F.C. Barcelona is a legendary football club from Barcelona, ​​Catalonia. Well-known players from F.C. Barcelona are Lionel Messi, Rivaldo, Laudrup, Sergio Busquets, Ronaldinho, Ronald Koeman, Philip Cocu, Marc Overmars, Johan Cruyff, Carles Puyol, Pep Guardiola, Andres Iniesta, Xavi Hernandez, Diego Maradona, Luis Figo, Patrick Kluivert, Gheorge Hagi, Romario and many more. Johan Cruijff has achieved great success with F.C. Barcelona. As a player at the club, he became champion only once and once won the Spanish Cup, the Copa del Rey, which was then called Copa del Generalissimo in Franco's time. When Johan Cruijff later took up the position as coach of F.C. In Barcelona, ​​he formed a team that became known as the Dream Team. The highlight reached by this team is winning the European Cup I in the year 1992. Nowadays, the European Cup is called the Champions League. In the year 2003 another Dutchman was appointed as coach of the club, Frank Rijkaard. He was able to match the Cruijff team and made sure that his team became champion in the years 2005 and 2006 and also won with F.C. Barcelona in 2006 the Champions League.

At Popmerch.com you will find the cheapest best merchandise at the best price. T-Shirts, football sets, football socks, caps, bags, hats, sweaters for young and old.

F.C. Barcelona Barça Layers Adaptable Backpack
€54,95
€45,95
A super nice bag from F.C. Barcelona! On the front of the bag there is Barça and this bag also shows a very nice logo of F.C. Barcelona.
Sale! 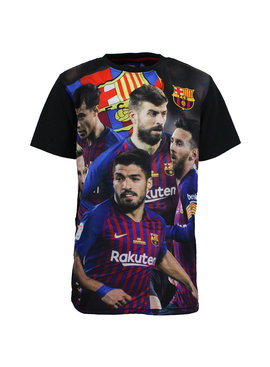 F.C. Barcelona Champions Backpack
€34,95
€24,95
This FC Barcelona Backpack is of course blue with and has the typical FC Barcelona stripes and the logo on the front! It has multiple compartments.
Please accept cookies to help us improve this website Is this OK? Yes No More on cookies »
← Return to the back office    Orders placed on workdays before 16:00 will be shipped the same day.    Hide