Nintendo was founded on September 23, 1889. Now we hear you think, "Is Nintendo really that old or is it a typo?". It is not a typo! In the beginning Nintendo sold only cards and later they switched to electronic devices with which they have scored great hits, such as the game consoles like the Nintendo 64, the Game Boy and the SNES. They have also released many popular video games such as Super Mario and Donkey Kong.

Popmerch.com is the webshop for official merchandise of your favorite games, series, films and more! And all at the lowest prices! Scroll down and shop our Nintendo collection! We have beanies, bags, wallets, t-shirts, sweaters, scarves, snapbacks, ties and more! If you have any questions or remarks please do not hesitate to contact our customer service. To stay up to date; like or follow us on one of our social media channels. You can find us on Facebook and Instagram.

Nintendo Super Mario Chain Chomp Metal Keychain
€12,95
€9,90
A super funny keychain from Chain Chomp from Super Mario Bros. This keychain is made of strong metal and hangs beautifully on the bunch of keys.
Sale!

Nintendo NES Console Bifold Wallet
€21,95
€18,95
Are you also a fan of the retro classic game console the Nintendo Entertainment System? Then this cool wallet is for you! The NES is the best ever!
Sale! 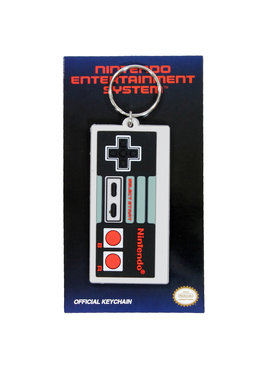 Nintendo Game Boy Logo Block Beanie Hat
€23,95
€18,95
A super cool official Nintendo Game Boy beanie hat with a block logo on it. The hat is black in color and is nice and warm on the head.
Sale!

Playstation 1 Shaped Bifold Wallet
€19,95
€14,95
Are you feeling a bit nostalgic already? This wallet has the shape and the beautiful light gray color of the original Playstation 1! We love it.
Sale!

Nintendo Game Boy Backpack
€49,95
€34,85
This Nintendo Game Boy Backpack has beautiful details! The bag has rubber buttons and it is possible to place an image behind the screen.
Please accept cookies to help us improve this website Is this OK? Yes No More on cookies »
← Return to the back office    Orders placed on workdays before 16:00 will be shipped the same day.    Hide